Mosquito season in Miami begins every year when the so-called black salt marsh mosquitoes, a buzzing cloud of bugs not known to carry the Zika virus or other tropical diseases, descends upon the area. The insects arrived a few weeks early this year — so, after sundown tonight, Miami-Dade County will send airplanes to blast naled, the controversial mosquito-killing pesticide, over wide portions of Homestead, the Redland, Florida City, Cutler Bay, and South Miami-Dade.

The aerial assault is sure to reignite a debate that stretched throughout Zika season last year: Should the county spray wide swaths of the city with naled, a chemical that’s banned for use in the European Union and is part of a pesticide family that is demonstrably harmful to humans in repeated doses?

Dibrom, however, is just the brand name for naled. They’re identical. Dibrom is the exact same chemical that was sprayed over Wynwood and Miami Beach during last year’s Zika outbreak. It’s the same chemical that caused multiple environmentalists and doctors to either demand the county stop spraying it over humans or at least properly warn people so they could take precautions not to inhale the fumes.

The county’s statement makes no mention as to what Dibrom is, which could lead many residents to think it’s a wholly different chemical. The news release does, however, say that “individuals with known allergic reactions should remain indoors during aerial application times.” The county will also call residents in the affected areas.

“Over the years, we have used both names in our news releases,” Gayle Love, a spokesperson for Miami-Dade Mosquito Control, says. “In this instance, I used ‘Dibrom’ when I prepared the release. Dibrom — also known as naled — is the insecticide we have used successfully for the past 40 years to address the black salt marsh mosquitoes. We reference both names in our online fact sheet, which describes the insecticides used in our Mosquito Control program.” 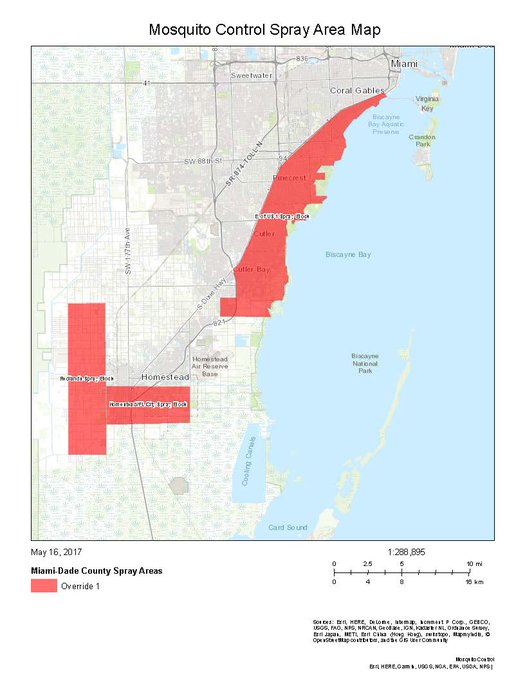 It’s important to note that this spraying has nothing to do with Zika. Residents in the affected areas have called in tons of complaints about the marsh mosquitoes, which can swarm in such heavy clouds that they once were blamed for suffocating three Naples cows in 1988.

After naled was reported to have killed scores of bees last year (which are vital to help pollinate all sorts of plants), the county has warned local beekeepers to cover and protect their hives. But the county’s news release is short on advice for people who might find themselves in the spray zones. So here’s some from us: Do your best to avoid the pesticide fog. (This is good advice regarding any bug-killer, not just naled.)

Naled belongs to a family of pesticides called “organophosphates,” which have been linked to a host of human ills for the past half-century. In fact, multiple studies have linked farmworkers who’ve been exposed to organophosphates with slower brain functioning and poor psychomotor function. According to PBS, other studies have linked the pesticide group to brain tumors, liver damage, leukemia, and birth defects.

Organophosphates are a kind of nerve gas that works similarly to the deadly war agent sarin. The U.S. Centers for Disease Control and Prevention and the Environmental Protection Agency authorize naled usage in extremely small doses — about one ounce per acre of land.

Though naled is authorized for use in the United States, it’s banned in the European Union. Last year, a scientist with the National Resources Defense Council ceded that the pesticide might be necessary to rapidly beat back Zika-carrying mosquitoes, but she also encouraged residents in spray zones to take precautions to avoid ingesting the pesticide. You might want to bring pets’ and children’s toys indoors before the fumigation, wipe down any equipment like outdoor play sets the next morning, and keep windows closed when the planes are buzzing overhead.